The growth and replication of living eukaryotic cells are regulated by lots of signals from outside and also from inside. Cell receives various signals from other cells by messengers, such as growth factor, which are recognized by cell surface receptors. On the other hands, inside of cell, intensive signals keep firing throughout the multiple networks to process/response the signal from outside and to check/maintain the correct metabolism of cells (ex. DNA replication, DNA damage response) and to monitor physiological stress of cells (ex. nutrient depletion). These inside-cell signaling networks are often composed of sensor, switch, adaptor, transducer and effector, like a sophisticated electric machine. Among these components, a few numbers of molecular switches control the lots of cellular process. Interestingly, these molecular switches can also integrated the information from sensor and determine the responses. Any unexpected disruption of these signaling pathway is responsible for human disease. 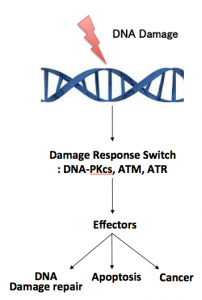 The main goal of our research is to understand the detailed molecular mechanisms of molecular switch (ex, PIKK members) networks in  the DNA damage response, by using both structural and biochemical approaches. Base on this information, we wish to provide fundamental understating of acting and controlling mechanism of molecular switches, which can lead to potential drug design.

The 230-kilodalton RAG1–RAG2 heterotetramer is ‘Y-shaped’, with the amino-terminal domains of the two RAG1 chains forming an intertwined stalk. Each RAG1–RAG2 heterodimer composes one arm of the ‘Y’, with the active site in the middle and RAG2 at its tip. The RAG1–RAG2 structure rationalizes more than 60 mutations identified in immunodeficient patients, as well as a large body of genetic and biochemical data. The architectural similarity between RAG1 and the hairpin-forming transposases Hermes and Tn5 suggests the evolutionary conservation of these DNA rearrangements. 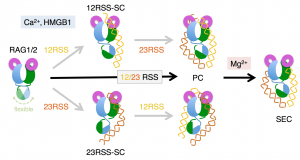 To maintain the specificity of recombination, RAG1/2 complex recognizes Recombinations Signal sequences (RSSs) flanking the variable (V), diversity (D), and joining (J) genes segments. Two types RSSs exist with a spacer region of 12 or 23 base pairs named 12RSS and 23RSS respectively. Recombination is only happening between two different lengths of RSS (ex, one has a 12RSS and the other has a 23RSS). This phenomenon is known as the 12/23 Rule. RAG1-RAG2 complex mediate this ’12/23 Rule’ by using a simple movement of short domain named NBD (nonamer binding domain)